It's been two years but I'm back! I've had a lot going on and have been way too busy to post about it, but here's a sneak peek... 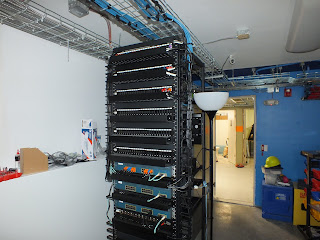 Long story short, I bought a house with my wife and have been renovating it into the lab of my dreams. When complete, it will have a dedicated wet chemistry bench, 400 square feet of ESD-floored lab space, 200 square feet of office/conference room space, over a mile of multimode fiber and copper Ethernet cabling, and lots of other goodies. There will be a post (or more likely a series) on the setup when it's done, but that's still a few months out.

Among the new toys I've acquired is a LeCroy WaveRunner 8104 oscilloscope - a beast of a scope with four 1 GHz channels at up to 20 Gsps.

The stock passive probes have a rated bandwidth of 500 MHz and, as with all passive R-C probes, have severe input impedance roll-off at higher frequencies. According to the datasheet, at ~150 MHz the input impedance drops below 100Ω and it only gets worse from there! As you might imagine, this isn't going to be healthy for signals on a 50Ω line.

LeCroy does sell active probes (such as the ZS1500) but they are not cheap - even secondhand, you're looking at a low four-figure price tag per channel. I might pick one up for comparison purposes eventually, but won't be evaluating them during this post.

In order to explore different probe designs, I built a characterization board on OSHPark's 4-layer process. It has an edge-launch SMA at either end of two 50Ω microstrip traces, a ground plane on layer 2, then the bottom layers are unused. (I could have done this as a 2-layer board, but the traces would have been massive given the increased distance to the ground plane.)

The test board has two sets of microstrips to allow A/B comparison, or passing differential signals through the test setup. They had to be pretty far apart due to mechanical constraints of the SMA connectors, and I elected to route the signals loosely coupled to avoid unwanted parasitics during single-ended tests.

I didn't even bother testing the standard alligator-clip ground wires on the PP022 probes, because I knew these were way too inductive to be of any value whatsoever for high-speed signals. Plus, to make it a fair comparison I needed to give the stock probe a chance to put its best foot forward. All of this testing was done with the spring-tip ground.

The first test signal was a 1 GHz pure sine source built around a Crystek CCSO-914X-1000 oscillator with some additional filtering on the output to remove harmonics.

Unsurprisingly, the signal was severely attenuated since it was well past the bandwidth limit of the probe. The peak-to-peak voltage measured via the SMA feed-through was 1930 mV while the PP022's output read 657 mV, or about -9.4 dB of insertion loss. The probe also loaded the signal down noticeably; when the probe was removed the SMA feed-through signal read 2192 mV.

All screenshots were gathered using the "glscopeclient" software I've been writing over the past few months. There will be a separate post about it once I've done a bit more testing and development.

The other probe being tested today was a custom 20:1 transmission line probe. I had high hopes for this design as I had used it with good results on slower circuits in the past, but this was my first time trying it on such fast signals.

This probe has a nominal 1KΩ impedance at DC and should roll off fairly slowly, since it has a largely resistive input stage (953Ω into a 50Ω line). At frequencies in the GHz range the resistor begins to become slightly capacitive, although inductive parasitics are probably still negligible if the models I've looked at are accurate.

The test setup was pretty much the same as before, except I used the helping hands to hold the probe. (I have a 3D printed shell on order that fits the same Pico Tech probe positioners I used on the PP020, but it's not here yet.)


At first glance, performance was quite encouraging. The loading was noticeably less (feed-through signal was 2003 mV, vs 2192 un-loaded and 1930 with the stock probe) and the measured signal amplitude was 946 mV, very close to the actual value. This suggests the experimental probe design has a -3 dB bandwidth right around 1 GHz, or double the bandwidth of the stock probe!

The experimental setup was identical to before, except that both legs of the test board were used since the GTP transceiver has a differential output. Although I was only probing one leg, I wanted to run clock recovery off the differential signal to minimize jitter in my measurements.

The PP020 performed surprisingly well.
Although it did noticeably degrade the feed-through signal, and the eye was attenuated to oblivion (with a mere 110 mV opening), the individual bits were still (barely) visible in the waveform display. Not bad for gigabit data on a 500 MHz probe!

This failure was entirely expected - but what I did not expect was how poorly my own probe design performed on the same test signal. While it was less intrusive to the pass-through signal, the eye measured through the probe was practically nonexistent.

Something was clearly not right, but the eye was so garbled I had a hard time seeing exactly what. I recompiled the FPGA bitstream to send a much slower, and more repetitive, test pattern - 0xFF00 at the same 1.25 Gbps rate. This is equivalent to a 156.25 Mbps 1-0-1-0 pattern, or a 78.125 MHz squarewave.

With no probe, the signal looked quite nice. There was a small amount of ringing on the rising edge, but this didn't impair readability of the signal at all. I also tried another color ramp (matplotlib Viridis) for the eye patterns in hopes of seeing more detail.

With my probe, the results were less impressive. There was a noticeable step on the rising edge followed by what looked like a spike above the nominal voltage, followed by the same ringing present in the original signal.
By treating the rising edge as a TDR impulse and comparing amplitude to the final value, we can determine that the initial rising edge reaches an impedance of about 38Ω for ~600 ps, then 55Ω for a bit over 1000 ps, then stabilizes to its final value (the 50Ω termination at the scope). Given that the scope only has 1 GHz bandwidth I'm not entirely sure how accurate this data is, but it's all I had to go on.

The obvious hypothesis was that the 38Ω area was an impedance mismatch at either the probe needle or the MMCX connector. I discounted the needle as the mismatch initially, because an 0.51mm diameter needle shank 2mm from a ground lead has an impedance of 244Ω which didn't match the observed data whatsoever.

The next obvious target was the MMCX. I calculated 26Ω impedance for the 1.1mm wide center contact over the ground plane (I had somehow forgotten to put a ground cutout under it). After milling out a cavity, though, performance didn't seem to improve by any detectable amount.
Without a 3D field solver, I have no way of knowing if this cavity was large enough. I might try and make it bigger at some point.

The other possibility is that the lack of a cutout under the needle is problematic. I initially thought this would be OK because the needle is about the same diameter (0.51mm vs 0.41mm) as the PCB trace, but later calculations for an 0.51mm wire above a ground plane using the OSHPark stackup suggest that the impedance of the needle mounting could be as low as 30-40Ω which is consistent with the observed impedance hump.

Finally, the 0.41mm microstrip appears to have been over-etched closer to 0.32mm. If the needle mounting is the impedance mismatch, this would be consistent with the observed 55Ω hump after it. I might try thickening the microstrip with solder to see if this helps bring impedance up closer to 50.
Posted by Andrew Zonenberg at 1:01 AM 1 comment: