I've been using KiCAD as my PCB design tool of choice for years, and as my designs grew in complexity I began using Sonnet for EM field simulation prior to manufacturing boards.

Unfortunately, interoperability between these tools was less than ideal.

I spent a while tinkering and came up with a flow using KLayout that seems to work well, so I thought I'd do a quick writeup so other folks could benefit from it. This might be of interest to users of other PCB CAD tools as well. Although KLayout is nominally an IC mask layout editor, it can also read Gerber!

Nothing special here. Export your gerbers just like you would for manufacturing a board. 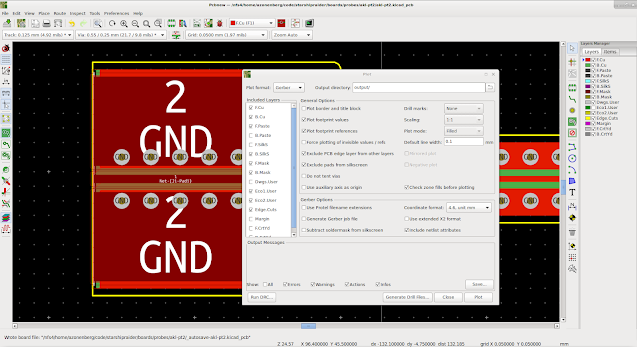 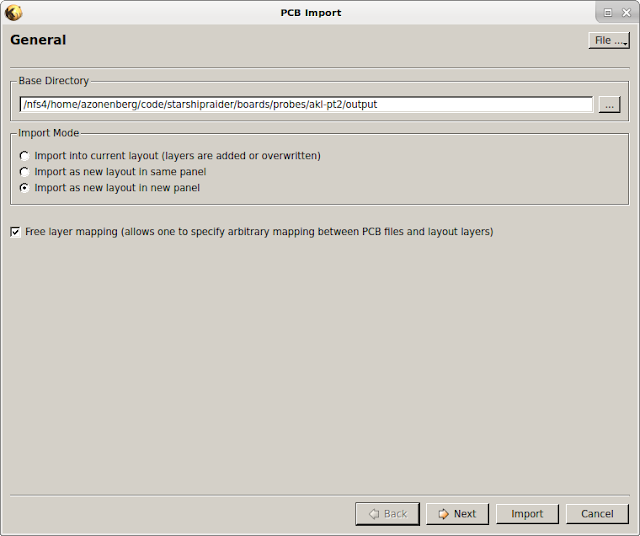 On the next page, if asked to automatically populate the project, say "no". Answering yes will result in all of your soldermask, silkscreen, etc files being imported as well, which you probably don't want.
Click the plus sign button in the top right of the dialog and select all of the copper and drill layers of interest for your simulation. 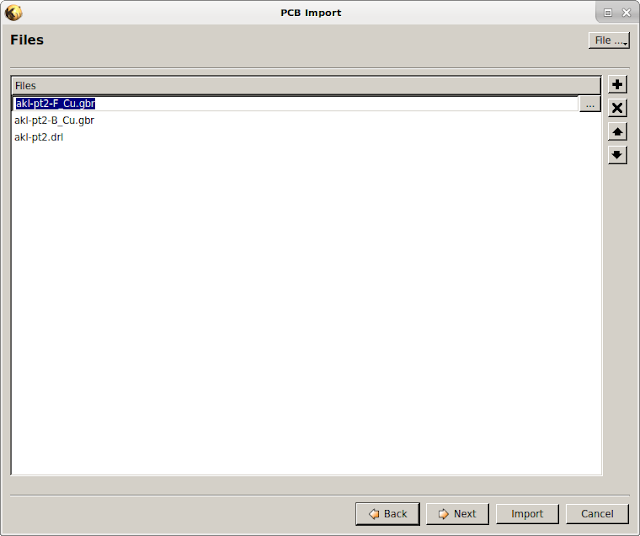 On the next page, you should see one GDS layer generated for each of the files you're importing. There's no need to touch any settings. 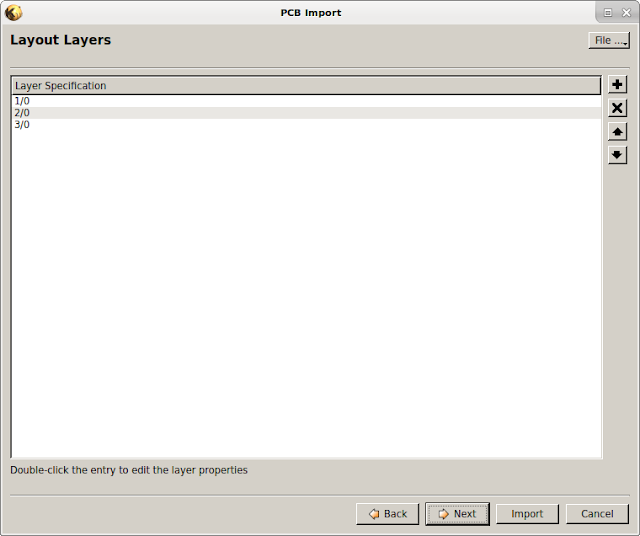 On the next page, map gerber files to GDS layer IDs in a logical order. I suggest top to  bottom with blind/buried vias in sequence and through-board vias at the end. Each gerber file should be mapped to exactly one GDS layer. 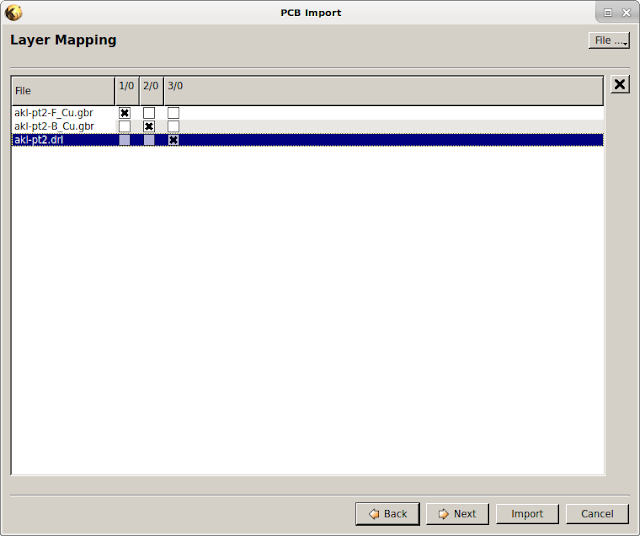 Leave all settings on the next page as default. 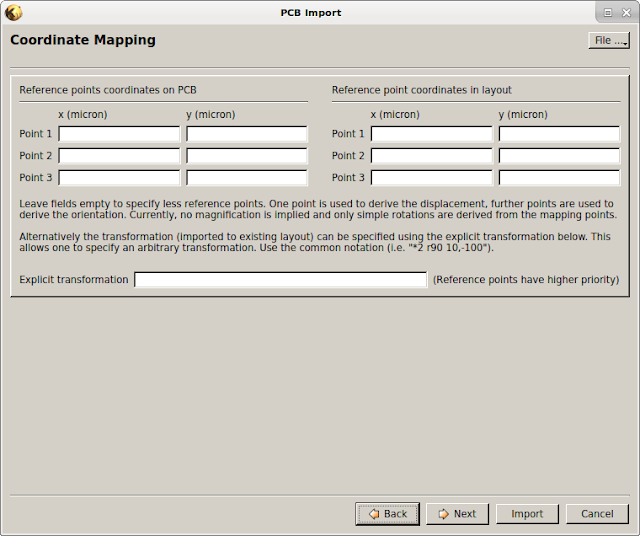 On the next page, make sure the database unit is 1.0 micron. Coordinates are rounded to multiples of the database unit internally, so it needs to be small enough to avoid round-off errors. Microns are the most convenient unit to use with Sonnet's DXF importer.

Check the "merge polygons" box. This flattens all overlapping polygons, which is important because KiCAD likes to generate extra gerber flashes in vias and zone fills.

While not merging, or merging in Sonnet, will ultimately produce the same simulation result, Sonnet's geometry editor (xgeom) gets really slow if your geometry has too many polygons. Flattening before Sonnet sees the board avoids this. 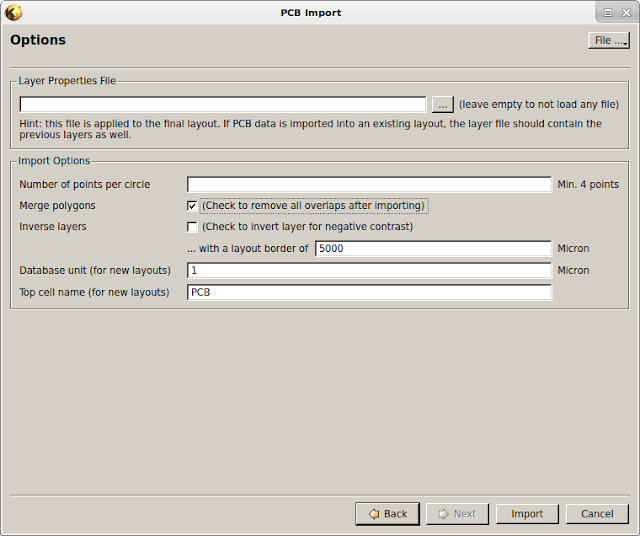 Now the gerber conversion is done! Click "import" and you should see the PCB in the KLayout editor view. 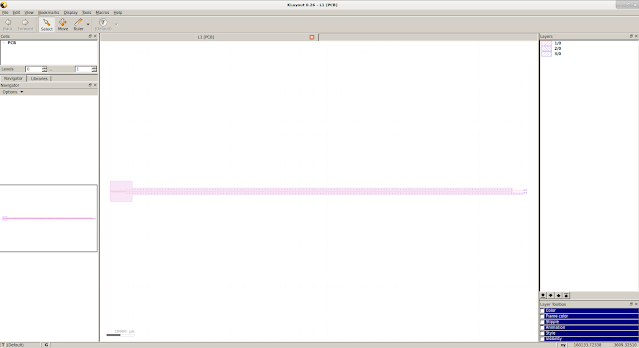 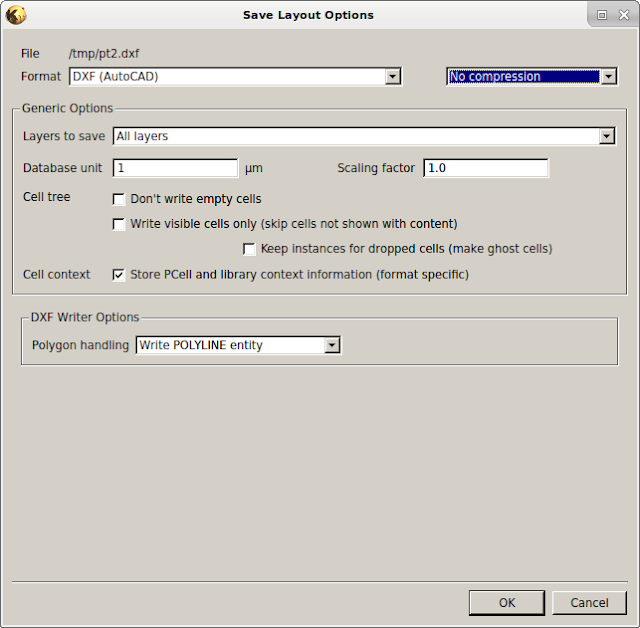 Create a new, empty Sonnet project and configure your desired stackup so that all layers and metal types are available for import. Select File | Import | DXF and choose the generated DXF file.
Choose "Import using present project as template". 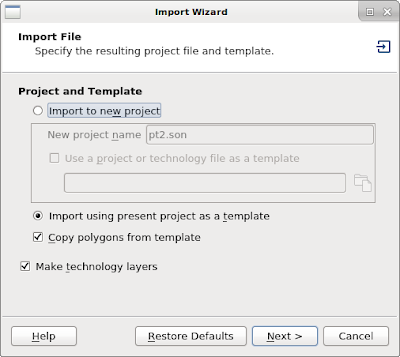 On the next page, enter the layer mappings you selected in KLayout.

On the next page, select units as microns. 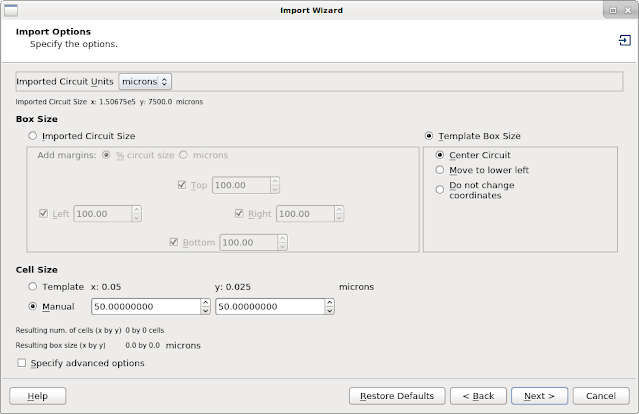 For the remainder of the Sonnet import wizard, enter settings as appropriate for your design. Converting vias to rectangular greatly reduces memory requirements for simulation and is normally OK as long as the vias are electrically small.
If you have large via fences, coplanar waveguides, or similar, the "simplify via arrays" option may be of use as well. This one needs to be used with caution because it sometimes merges more vias than desired. I generally prefer to import individual vias and merge manually to avoid unexpected results. 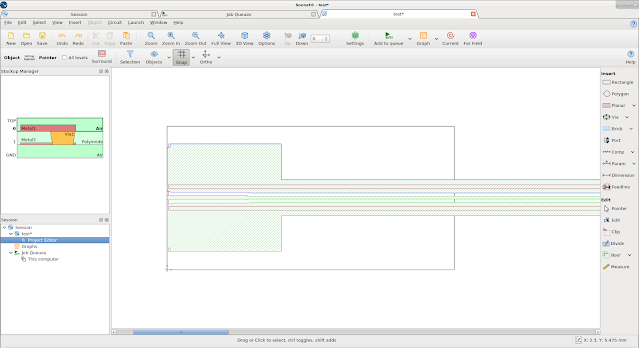 Posted by Andrew Zonenberg at 8:43 PM No comments:


Over the years I've grown to have quite the collection of RF cables in my lab, some with better datasheets than others. But how good were they really? I decided to fire up the VNA and collect some data to see how a few of them really performed.

Experimental setup:
All cables were SMA male at both ends. If available, I tested two identical cables of each type to see how well matched they were.

4001 S-parameter points were collected at even intervals from 10 MHz to 6 GHz. I used Sonnet's S-parameter viewer for analysis of the collected data,

Results were mostly as expected - longer cables had higher loss, and higher quality cables had lower. I was a little disappointed to find that the Crystek semi-rigid cable didn't outperform the Mini-Circuits, though.


After normalizing to cable length, results were:

It's a bit hard to see since the graph is so busy, but the CD International cables (red, blue, black) had consistently higher return loss than the Crystek (pink, cyan) and Mini-circuits (green).

Nothing too surprising here.

Everything was pretty flat, and longer cables had longer delay. Calculated propagation velocities (assuming all cables were exactly the nominal length):

For the cables I tested two of, I zoomed in to compare how tightly the propagation delays were matched.

Most of these measurements are a bit noisy because I'm pushing limits of phase resolution on my VNA.

There's a few takeaways from this little experiment.

First, at the speeds I currently work at, there appears to be no need to worry about buying expensive phase-matched cables. While different types of coax had significant skew between equal-length cable assemblies, skew between two units of the same SKU ranged from "at the edge of my ability to measure" to entirely undetectable.

Given that my oscilloscopes sample at 20 Gsps when not doing channel interleaving, the maximum skew between any of the identical cables tested would result in a single sample of phase error. This shouldn't be enough to cause problems with my measurements.

Second, all of my cables have non-negligible loss. Even the high-quality Mini-Circuits cables have 0.8 dB of loss at the 2 GHz bandwidth limit of my current flagship scope, and 1.1 dB at the 4 GHz bandwidth limit of the new one I have on the way. I'm definitely going to start thinking more seriously about de-embedding cables from my measurements moving forward.
Posted by Andrew Zonenberg at 4:39 PM 6 comments: